We recently learned that University of San Francisco point guard Avry Holmes is transferring to Clemson. Now let’s discuss how this impacts Clemson’s basketball program moving forward.
Avry Holmes will not be eligible to play the 2014-15 season, however his transfer will affect recruiting needs immediately. With Filer transferring out (and even if he hadn’t) Clemson needed a solid point guard recruit to succeed Rod Hall, who showed great progress and leadership last year en route to posting an efficient offensive rating (Ortg) of 106.9 (more on interpreting KenPom statistics to come). With Holmes, Clemson now has their heir apparent. Avry Holmes is in great position to step in as a redshirt junior and assume the role as starting point guard upon Hall’s graduation. 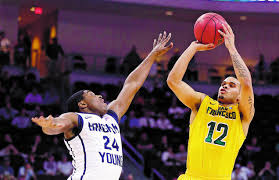 Nevertheless, Clemson will still pursue Juwan Evans of Kimball, TX. (That’s North Texas, almost Oklahoma, but he has Greenville ties a well). The point guard prospect already has a Clemson offer as well as offers from Oklahoma State, Baylor, Cincinnati, Tennessee, and SMU among others. He is a 247 four-star recruit and one of three PGs Clemson has extended an offer to thus far (the others being Jalen Coleman and Ty Hudson). He would be a great addition to the Tigers next class, but the need is not quite as pressing, as the Holmes transfer means Evans likely wouldn’t be thrust into a starting role as a freshman.
The big recruiting need now will be in the front court. Ibrahim Djambo only has one year of eligibility left and Nnoko only two. Post-players typically take longer to develop so finding at least one, preferably two, quality post players is now the clear goal for the next class. The post-player I’m most intrigued by is Derrik Smits from Zionsville, IN. He is the son of former NBA center Rik Smits who played 12 seasons for the Pacers. Derrik made an official visit to Clemson last September and received an offer then. He also has some offers from schools in the Midwest like Butler and Xavier. This will be a recruit where Clemson needs to leverage membership in the ACC and the expertise of Associate Head Coach and post-player guru Mike Winiecki to draw him away from the more local schools. Without inside knowledge directly from the Smits, I imagine Clemson has a reasonable chance here so long as Notre Dame and Indiana fail to give an offer.
Another post-player, Raymond Spalding, is a 6 foot 9 four-star out of Kentucky with offers from Clemson, Georgia Tech, Boston College, Xavier, Indiana, and a few others. Basketball recruiting is a bit strange in that the Tigers have 11 offers out for just three open scholarships (as Djambo, Hall, and Harrison exhaust their eligibility). Obviously they’re not putting all their eggs in just these three players I’ve mentioned, but they would be major additions.
Getting back to Avry Holmes, who will join the active roster with that recruiting class, we look at his competition level while at San Francisco. He posted some phenomenal numbers to be sure, with an Ortg and 3P% that would have led Clemson. His AST Rate would have been second only to Rod Hall and he is much more careful with the ball than Adnois Filer, whose roster spot he has assumed. To see how those will translate in an ACC that should be fully loaded with great coaches and players, we look at his schedule with San Francisco. The Dons actually played 12 games against teams ranked in the top 100 of KenPom’s team rankings (Clemson played 19). Holmes played well in games against BYU and Gonzaga so it is not as if he simply loaded up his numbers against smaller programs. With a redshirt year to hone his skills and practice against ACC teammates, there shouldn’t be a large drop-off.
He is a willing passing and deadly three-point shooter, the latter of which has been sorely lacking for Clemson in recent years. As such, he will be a great fit a strong replacement for Rod Hall. Couple him with Gabe DeVoe, Donte Grantham, Jaron Blossomgame, and Landry Nnoko, and Clemson could be a force for their 2015-16 season in Greenville’s Bon Secours Wellness Arena.