We again welcome our college basketball writer, Mark Gordon, for a guest blog post. In this one, he breaks down the year ahead for the hardwood Tigers. Enjoy, share, and please leave your comments in the section below. Also please use the Facebook widget on the right sidebar to “Like” us on Facebook.

Basketball season is upon us Tiger fans, and much like last year, there is a giant question mark hanging over what “could be” before the Clemson Tigers tip-off the regular season against Stetson on Friday, November 8th. Once again, the Tigers will field an incredibly young team (five juniors, zero seniors) and the offseason development and maturity of these Tiger cubs over will determine whether this team will begin to show the potential that fans have been dreaming of or whether the ACC projections are correct (picking Clemson to finish 2nd to last in front of only the lowly Virginia Tech Hokies)

The question on everybody’s mind: “Is Coach Brad Brownell on the hot seat?” Ryan Kantor and I had a spirited debate over this topic a couple of months ago where I came to the conclusion that the answer to that question was yes, and that it was time to move on (Ryan disagreed). Since that blog post, I have done a 180 and believe that Brownell’s job will not be in jeopardy unless the Tigers have a catastrophic season. I have been very critical of Brownell’s guard heavy recruiting, but his recent addition of JUCO forward Ibrahim Djambo and incoming freshman Sidy Mohamed Djitte, have done enough to show me that he has recognized that it takes some bigs to win in the “pound em down low” ACC. Clemson will also be wary of a coaching change in the midst of the commitment of highly touted recruit Donte Grantham (Hargrave Military Academy, Chatham, VA). Grantham’s commitment coupled with the recent approval from the Board of Trustees for a $60-80 million facelift to Littlejohn Coliseum considerably lengthens Brownell’s leash over the next few seasons.

Enough looking deep into the crystal ball and onto the 2013-2014 Tigers. The one thing that will keep Clemson’s hopes alive this season will be their ability to adapt. Remember Brad Brownell’s low key motion offense? I hope you do because I’m not expecting to see much of it. While the roster lacks the star power to win high scoring half court games, the Tigers strength is in their depth. Coach Brownell stated after the Francis Marion scrimmage that this could be the deepest team that he has ever had. As a result, you are going to see the Tigers run and do lots of it to counter the fact that they don’t have the horses to win a half court basketball game.

The guard rotation is very deep. Junior Rod Hall will start at one of the guard positions and has proven that he can be an effective distributor on the run (110 Assists to 60 Turnovers in 2012-13). Sophomore Jordan Roper (7.9 ppg) will start at the other guard position and will rotate with Hall between PG and SG. He is Clemson’s go to scoring threat. While these two will most likely be starting November 8th against Stetson, that doesn’t mean much on this team as you will see sophomore Adonis Filer, redshirt sophomore Devin Coleman, and junior Damarcus Harrison early and often. Clemson will have to avoid the injury bug, which has already hit with the loss of promising freshman shooting guard, Patrick Rooks, to a season-ending hip injury. This loss will hurt because a more of Clemson’s offensive success will have to come from the 3-point ball, where Rooks specializes. Look for Devin Coleman to be the trigger man behind the 3-point line to spur the Clemson offense. 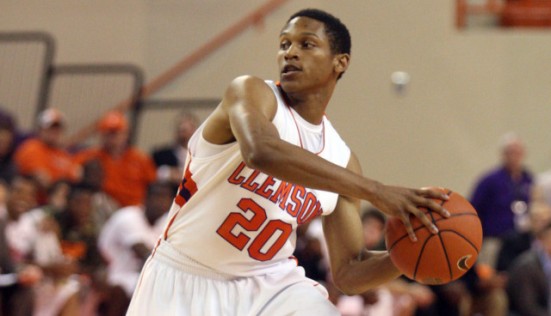 The small forward position is well staffed with returning leading scorer K.J. McDaniels (10.9 ppg). While I did state that Jordan Roper is Clemson’s best scorer right now, by the end of the season I expect that honor to belong to redshirt freshman Jaron Blossomgame. Blossomgame is an extremely talented and high character young man who the Tigers will lean on this year. His development and poise this season will determine whether this is a 10 win team or a 15 win team. He will see time at both forward positions. Unfortunately, Clemson’s glaring weakness comes to play with the lack of depth in the front court. The only centers listed on Clemson’s roster are sophomore Landry Nnoko and freshman Sidy Djitte. Nnoko has shown flashes on the defensive end of the floor, but has not shown the offensive development that Brownell had hoped for. I don’t expect much from Djitte this season as he is in the same boat as Nnoko getting a late start to basketball and still offensively raw. I expect Djambo to see a bulk of the minutes at the power forward position, but right now is just too thin (listed at 205 pounds) to succeed in the paint.

While I believe that the change in style and depth can carry the team to a successful season, the lack of depth in the paint limits this team in ACC play. As a result, I see the Tigers scrapping their way to 14 wins. One thing that I can guarantee that you won’t see from this team is a lack of fight. As is common with young teams, all of these kids want a chance to play and will show it on the court. We’ve also heard great reports about this teams budding chemistry and improved camaraderie. With all this, we should enjoy some exciting games in Littlejohn Coliseum this Winter.