A few things to mention before I offer my ACC Power rankings. Firstly, this won’t be a consistent weekly digest. For that, Robert Reinhard of Blogger So Dear does a phenomenal job and I recommend his #GoACC Power Rankings. Also, these should not be viewed as projected standings because standings are to some extent dictated by schedule and divisional assignment. Instead, these represent my best estimation of which teams are legitimately the best in the conference. So, before the season starts, here are my Pre-Season ACC Power Rankings.

1. Clemson: Given their returning starters, continuity on the coaching staff, and success last season, media members at the ACC Football Kickoff overwhelmingly picked Clemson to win the ACC. Even more overwhelmingly they predicted Tajh Boyd to take home ACC Player of the Year honors for the second year in a row. At this point, I have no reason to disagree with either. ESPN’s College GameDay will be there for their season opener vs. UGA. It will be the biggest game of the week and first half of the college football season at large.

2. FSU: The ‘Noles have recruited extremely well in the past cycle and they’ll need it, given they return the fewest starters in the ACC. They’re immensely talented. They replace first round NFL talent with some of the top recruits from 2012 (QB Jameis Winston and DE Mario Edwards.) Their Labor Day clash at Pittsburgh will be an interesting measuring stick to start the season.

A tier of their own

3. Miami: The Hurricanes may not be “back” just yet, but they return 10 starters on offense and nine of defense. They received 65 of 120 first-place votes to win the Coastal and should return to relevance this season. 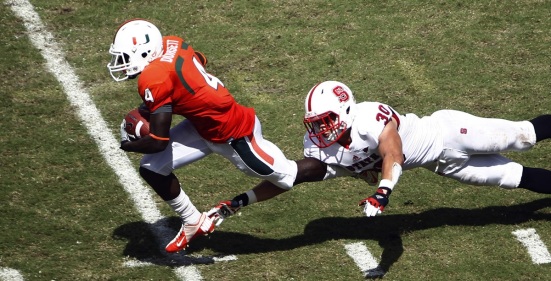 4. VT: The Hokies may get off to a rocky start against Alabama. They’ve suffered some Fall Camp injuries and will be severely outmatched by the Crimson Tide. That said, I’m not quite ready deem a program that has had such a long track record of success as “done.”

5. GT: With a new defensive coordinator and eight returning starters on the defensive side of the ball, improvement is generally expected. Vad Lee takes over at QB and expectations are high.

6. UNC: They kick off the college football season with a Thursday night game against the Gamecocks (unless you’re watching Presbyterian @ Wake that same day). If by some miracle their offensive line, which lost three starters, can hold up against one of the SEC’s top defensive lines they may scare South Carolina. That being said, I don’t see them being able to handle the onslaught in Columbia.

7. Wake Forest: The teams in this tier will be happy just to make a bowl game. After a disappointing 5-7 finish last season, a Demon Deacons team that returns eight players on offense and eight more on defensive should do just that. They’ve had four straight losing seasons, but if the program is to get back on track anytime soon, this is the year. Tanner Price returns at QB and has started 30 straight games.

8. Maryland: Their ACC swan song could end in a bowl game if they don’t slip up. C.J. Brown, who you may remember from his great performance against Clemson two years ago in College Park, will be back at the helm after being injured last season.

9. Pittsburgh: At Virginia Tech’s low point last season, they lost to Pittsburgh. Now the Panthers return six starters on offense and will break in a new QB and RB. The ACC schedule will be a tougher task than what they’ve faced in year’s past. Hosting FSU on Labor Day will be a great measuring stick for the program and how long it’ll take before they can compete in the Coastal.

Poor football is being played

10. NCSU: The Wolfpack play 10 games in North Carolina and eight in Carter-Finely Stadium. This may make their record look better than the team. Dave Doeren was hired away from Northern Illinois to replace Tom O’Brien. There is reason for hope looking forward, but they’ll be learning a new system with a new QB so it may be a slow start.

11. Virginia: They’re SOFT! Their schedule is loaded with BYU and Oregon out of conference and a rotating cross-divisional game against Clemson. That will preclude them from a bowl bid, but they may start to show signs of improvement with some quality coaches added to Mike London’s staff this off-season.

12. Syracuse: They may never be competitive in the Atlantic Division, but hopefully they extend the conference’s media coverage into the country’s biggest market. The nearby Bills nabbed their coach while their star QB is also off to the NFL. They were only a marginal bowl team in the Big East. FSU and Clemson could embarrass New York’s 3rd favorite football team (Giants/Jets).

13. Duke: One step back, two steps forward. Duke’s program is improving under David Cutcliffe with stadium renovations being physical proof of that, but they lost QB Sean Renfree and WR Connor Vernon who is the all-time leader in receptions (283) and yard (3,749) in the ACC.

14. BC: Steve Addazio (from Temple) replaces Spaziani, but nobody really cares. The talent is lacking just as much as the fan base. He’ll need some time to fix the program.