Last week I gave you my take on the AL MVP race giving Granderson a very slight over Jose Bautista. Now it’s time to look at the race in the National League. With still over a month left to play, much can change, but here’s the outlook now. 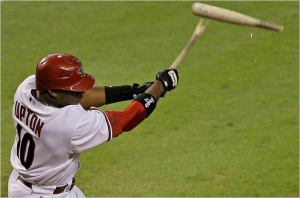 Roy “Doc” Halladay’s numbers are amazing and worthy of mention, however with Cliff Lee and Cole Hamels putting up similar numbers in the same Phillies rotation it’s hard to say they rely heavily on Doc. At this point, I give it to Ryan Braun because his contributions to a playoff team, however there is still time for Matt Kemp to catch him, especially if the Brewers somehow miss the playoffs, but at this point I’d say the race is really between Ryan Braun (LF-MIL) and Matt Kemp (CF-LAD).

Who do you think is the most deserving NL MVP at this point? Be sure to share your thoughts in the comments or with me on twitter @Ryan_Kantor.

9 thoughts on “NL MVP Outlook: Braun and Kemp Up to Upton”