Nearly every American has been impacted by the ongoing COVID-19 pandemic. Sports fans have missed March Madness and at least to-date the NBA and NHL playoffs. MLB’s opening day and the Masters have also suffered lengthy delays. More importantly, over 75,000 Americans have died and over 33,000,000 have become unemployed as a result of lockdowns to mitigate further deaths.

Despite the horrible circumstances, things are getting better and I believe will improve enough for Clemson to have a football season this Fall. There are many reasons for that optimism, but let’s start with the NFL. The NFL just released its 2020 schedule on Thursday, May 7th which contained no delays, though international games will be moved back to the US.

Meanwhile, most colleges with relevant FBS teams are planning to get back to campus for Fall semester. Universities cannot (in good faith) charge the exorbitant tuition they often do without providing the college experience that can only come on campus and the health risk for healthy college students is relatively minor. Purdue’s President, Mitch Daniels, addresses both of these realities:

“Purdue University, for its part, intends to accept students on campus in typical numbers this fall, sober about the certain problems that the COVID-19 virus represents, but determined not to surrender helplessly to those difficulties but to tackle and manage them aggressively and creatively.

…All the evidence reveals that students who live and spend more of their time on campus succeed academically at higher rates.  The learning experience is enhanced not only by being closer to faculty, labs, and classrooms, but also by being closer to other students, especially those from different backgrounds.

At least 80% of our population is made up of young people, say, 35 and under.  All data to date tell us that the COVID-19 virus, while it transmits rapidly in this age group, poses close to zero lethal threat to them.”

“As we close out this extraordinary semester, our staff and faculty are already fully engaged in the complex planning necessary to ensure a safe return to as close to normal operations as is possible this fall.

We are approaching the fall with a ‘laser focus’ on returning to in-person learning, as our Associate Vice President for Public Safety Greg Mullen told our Board of Trustees last month.  – President Clements

Two things that must happen for college football to happen this Fall are 1) the NFL not stopping (it’s almost unthinkable that student athletes would play while it wasn’t considered safe enough for professionals making millions) and 2) college students getting back on campus. Both of those boxes now seem very likely to get checked.

These decisions are not being made ignorant to the latest data on the spread of COVID-19 in the US. Many have been calling for more testing for quite some time and we can now see that progress is being made. I hesitate to say we have enough, however it’s clear we have significantly moved in the right direction. Here’s what one epidemiologist at Harvard had to say about how critical testing was and where it needs to be:

“Widespread testing is key to helping communities quickly identify infected people, and trace and isolate their contacts. This strategy can help prevent more waves of illness.

But how much testing is enough?

There’s no exact number to aim for, but here’s a guiding principle: You want a low percentage of your tests to come back positive, around 10% or even lower.” – William Hanage, epidemiologist, Harvard.”

So where do we stand with positive test percentages? Here are three charts (one for each type of lab reporting to the CDC) that illustrate the number of tests given per week and the percentage that come back positive (Source: CDC):

You can see in the charts the raw numbers of tests administered has increased and the percent positive has dropped precipitously. Cumulatively, the percentage of positive specimens since March 1 is 17%, but from April 26 – May 2 it is down to 13.1%. It’s still not below the 10% threshold we need to see, but it is trending strongly in the right direction.

Additional positive news comes from recent testing done in the prison systems. As of Thursday, May 7th, Tennessee’s prison system had tested 6,020 prisoners. and 1,439 tested positive (24%). How could this possibly be good news? Well, of those 1,439 positive cases, only one has died. In the Bledsoe County Correctional Facility, 580 of 586 showed no symptoms. Only two were hospitalized. None died. This means the mortality and hospitalization rate could be far lower than we thought just a few weeks ago.

While all of this is great news, it’s highly improbable that this simply goes away anytime soon. Fall sports will very likely look different in a meaningful way. Here’s what Clemson’s president wrote about what the return to campus in Fall might look like:

“…we recognize that our new normal will look different than in the past, and that a return to having our students back on campus can only occur in a way that is consistent with the best public health practices. For example, any scenario that involves having students back on campus will be accompanied by the capacity for COVID-19 testing and adherence to CDC guidance related to safe physical distancing, face coverings and more.

We will release the details of our plans in the near future.” – President Clements

If students are on campus, you can bet getting football players on the field will be a priority:

“Being able to play some part of the football schedule is crucial to our athletic budget. We are very focused on trying to make sure that we can come to some sort of arrangement where there will be football.” – TTU Chancellor Lawrence Schovanec

So what could be different for college football specifically?

To the extent possible, we could see social distancing measures implemented in stadiums.

“It is likely that social distancing will be in place at Williams-Brice and our other venues. We are running models currently to determine what kind of attendance we could have.” – Ray Tanner, AD U of SC

Meanwhile, the State has reported that Clemson told them they’re in discussions about “potential lottery systems, using IPTAY points acquired with donations or splitting season tickets into multiple packages.”

As for when the season will begin, I don’t believe a Spring semester football season (January – May) is viable as it cuts too deeply into NFL draft prep time and more importantly into the necessary offseason time to recuperate from a long grueling season. Rather, the most likely scenarios (given the information we have as of May 9) are that some schools either will make a late decision (July) to allow in-person learning which could result in a reasonably brief delay to the start of the season or some schools – mostly with second-tier football programs – will not return to in-person learning for the Fall semester.

Schools in California are especially at risk to not return. Cal-Berkeley seems least likely to be back. Stanford and UCLA could also be in question. USC, being in such a large urban area, could also have trouble returning in the Fall. You’d have to think Rutgers and Syracuse (closely connected with New York City), Northwestern (near Chicago), and Boston College (near Boston) might also be at risk of not getting back to campus.

In the ACC, Syracuse, Pittsburgh, Duke, Wake Forest, and Boston College have yet to make a commitment to doing whatever possible to resume in-person learning by Fall Semester. Those decisions won’t come until June. Imaging a season without them is interesting though. Perhaps Clemson replaces games against Syracuse, Wake Forest, and Boston College with Virginia Tech, Miami, and North Carolina. That may be preferable anyway! The Pac-12 could be more complicated if a larger proportion of schools skip the season, but it is a solvable problem for conferences that already have schedules in which each team doesn’t play every other conference opponent.

We won’t know exactly where this is all going until early to mid-June when schools start making decisions about football players getting back on campus to workout, something that must start by mid to late July to avoid a delay to the season.

While more information is coming, right now it looks like we’re in for a weird football season, but this is a time to be grateful for what we have and when one of those things is college football in the Fall, you better believe I’ll be thankful to have it – whatever it looks like. 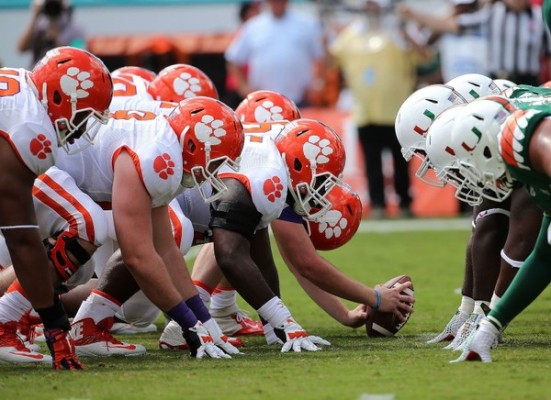