It was a long read, but well worth it. Coolidge by Amity Shlaes chronicles the life of the 30th President of the United States. He served in the time between World War I and the Great Depression (1923-1929) and thus is often forgotten in the annals of history. Nevertheless, he accomplished a great deal during the Roaring Twenties. The biography details his goals, accomplishments, and the key issues of the time, in a totally engrossing narrative driven manner.

Calvin Coolidge emerged to prominence as the Governor of Massachusetts. While in that post, the Boston Police went on strike. This was an era where strikes were all too common and very problematic. Coal Miners, for example,would often threaten to strike and leave most of the nation without heat for the Winter.

The “Boston Police Strike” became a national headline, with other governors and police departments watching anxiously, as the results of this strike would greatly influence cities across the country. Coolidge resisted pressure to a shocking conclusion, which I won’t spoil here. His extremely bold decisions catapulted him to political prominence.

That would lead him to a nomination as the running mate for Republican Presidential Candidate Warren Harding, They would campaign and win on “normalcy,” an end to the uncertainty and bevy of new laws from the Wilson administration. Now the Vice President of the United States, Coolidge was surprised at how little power the office really held and the lack of respect he was given in Senate. Of course, Warren Harding would die in office and leave Coolidge to carry out his policies. 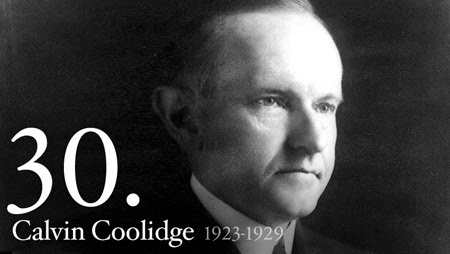 As President, Coolidge slashed taxes and the national debt. For the first time, the nation saw airplanes traverse the skies. Coolidge would be the first to light a Christmas Tree strung with electronic lights on the White House lawn. The carving of Mt. Rushmore was commissioned, with an inscription written by President Coolidge.

He would complain that “Democrats spend money like water,” and would veto a bevy of wasteful spending bills coming from both parties (popularizing the “Pocket Veto”). His administration would be the first to use “scientific taxation” now popularly referenced as the Laffer Curve. He would keep the size of the federal government in check, even when floods in the South and his native New England, tempted more, and he would humbly leave office after his first full-term, in respect of the example George Washington set.

Upon leaving office, he rejected offers to work on Wall Street, fearing a stock market collapse (The Great Depression loomed). Instead, he accepted a position authoring a newspaper column. He disagreed with the policies of his former staffer, now President, Herbert Hoover. The surplus he worked so hard to create would disappear as government spending rose to combat the depression. As the deficit grew under Hoover new taxes came into law. His surplus would turn into a $2 billion deficit and the tax rates he worked so hard to lower would be raised to a whopping 60%, exasperating the nation’s problems. In one of his columns he wrote, “A higher tax means real wages are lower… every home is burdened.”

When Hoover eventually failed in his re-election bid, FDR promised “bold, persistent experimentation,” quite the opposite of the “normalcy” Harding/Coolidge rode into office years before. The nation had turned back to the progressive policies that failed during the Wilson administration. Coolidge would pass away shortly thereafter, leaving a legacy of humility and honor in the US Presidency, one that has often been overlooked.

One thought on “Book Review: Coolidge by Amity Shlaes”