This is my 100th blog post! I hope you’ve enjoyed following my blog to this point. It’s really starting to take off. I’m nearing 10,000 all time views and I just added the pageview counter to the right sidebar. The CEO of a marketing research company told me he browsed by blog this weekend which really made my day. Thank you to my current followers and as always, please subscribe to this blog by clicking the “Follow” button at the top of the right sidebar. If you don’t have a WordPress account you’ll have to enter your email address. Thanks for reading!

In front of an ACC Championship record crowd of 73,675, composed of the two most passionate fan bases in the ACC, Clemson scored 28 unanswered second half points to claim the ACC Championship, defeating Virginia Tech 38-10. Will Smith’s “Miami” played over the speaker system as the clock struck 0:00, and Clemson clinched their first Orange Bowl berth since the 1981 National Championship season.

The game was played at Bank of America Stadium in Charlotte, the Panthers’ home field, which is an absolutely beautiful venue. Clemson ended last season in the same venue, though much less spectacularly in the Meineke Car Care Bowl (now the Belk Bowl). See my photos below: 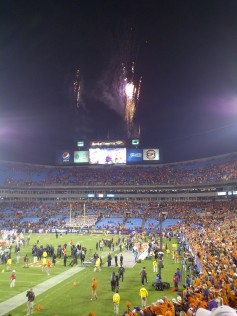 Clemson finished the game with 217 rushing yards. “I’m proud of Andre Ellington. He was big time player tonight on a big stage,” said Swinney. “He was one of the big keys in the game for us because we were able to run the football.” (ClemsonTigers.com)

Me and my much more attractive girlfriend at Bank of America stadium for what would turn into one of my most emotional and memorable sports moments, as a much deprived Clemson fan base was finally rewarded for their exuberant passion.

In my opinion, the great job Ellington did establishing the run set up QB Tajh Boyd to hit Dwayne Allen (who with this game cemented himself as the best TE in college football) for two TDs and Sammy Watkins (ACC rookie of the year) for another. He deserves a ton of credit, but it was the Clemson defense which really seized the momentum. The much maligned unit, receiving much criticism all year (and deservingly so), recovered a Logan Thomas fumble (caused by a great tackle from LB Shaq Anthony) on VT’s first drive. Boyd would then hit Allen for the first touchdown of the game. With that score Clemson grabbed a 7-0 lead and suddenly started believing in themselves again. The fans starting believing again too. Full recap here.

This championship game topped a great deal of memorable sports moments for me, including a FSU @ Clemson football game on Labor Day in 2007 which was my first as a Clemson undergrad, a Clemson @ South Carolina-Columbia game which Clemson won on a FG as time expired, and a whole bevy of Yankee moments involving Mariano Rivera and Aaron Boone.

For me, this was the most satisfying win I’ve enjoyed since the Aaron Boone game in the 2003 ALCS against Boston. Late in the fourth quarter, a Clemson fan a few rows in front of me stood up on his chair and turned around. He started the traditional Clemson cadence count chant, and then screamed “This is why we are THE university of South Carolina. We always have been, and we always will be!” He was referencing comments from Clemson head coach Dabo Swinney the Thursday before the game, in response to rude unsolicited insults from South Carolina-Columbia head coach Steve Spurrier. When he finished, the fans around burst into cheers as things got pretty emotional and teary. Years and years of frustration were finally quelled as Clemson accomplished the clear and simple overriding competitive goal of the athletic program–win a ACC football championship.

Credit to VT for a very good 11-2 season. Their fans were very nice, friendly and humble while fraternizing before kickoff. They’ll still go to the BCS, playing Michigan in the Sugar Bowl. Two ACC teams in the BCS will mean a lot more money going into the conference coffers. I on the other hand will be following the Clemson Tigers down to Miami for the Orange Bowl to cap off what has been the most successful Clemson football season in 20+ years!

5 thoughts on “Catharsis For Clemson With First Championship Since 1991: My 100th Blog Post”