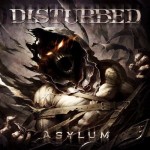 On August 31, edgy hard rock/metal band Disturbed released their fifth studio album, Asylum. Disturbed’s identifying qualities are again evident on this album; in fact, they showcase their abilities with good variation, making this one of their more mature releases. Some of the songs have that typical, rough sound with guitarist Dan Donegan’s chunky riffs, while others showcase singer David Draiman’s oft-overlooked vocal abilities. While most people recognize him for his caustic voice and gimmicky sounds (a Draiman trademark), Draiman also has supreme talent as a smooth, melodic singer. While this appears in some doses on all of the band’s releases, it is most evident on 2002’s Believe. On Asylum, it makes up probably around 50% of his vocal lines, providing a good mix that gives listeners the full scope of Draiman’s talents.

Nothing on Asylum is truly groundbreaking; rather, the album effectively fuses all of the elements we’ve heard in the past from Disturbed to form a complete effort from start to finish. As was mentioned, you hear all of Draiman’s vocal abilities, and Donegan’s guitar work is simultaneously heavy and technical. Draiman and Donegan are so powerful and noticeable that they almost overshadow the fine work of John Moyer on bass and Mike Wengren on drums. Regarding the band as a whole, one of their best qualities, and the thing that I personally like the most about them, is that while they can be very heavy, they really don’t ever sacrifice melody as a result. Metal-heads will love the aggression of the music, but most audiences will find themselves hooked by Draiman’s soaring melodies.

Lyrically, the band continues in the direction of dark subject matter, ranging from Draiman’s personal angst (Asylum, The Infection, Crucified, My Child) to disturbing (no pun intended) political, social, and historical issues (Another Way To Die, Never Again, Innocence). Some who have never really listened to the band might find some of the lyrical content to be disturbing (this word keeps coming up!), but personally, I feel that dark lyrics and negative themes often translate to more powerful and deep music, and Disturbed really verifies that notion.

I’ve gone over a lot thus far, but I haven’t really gone into detail about any songs specifically. I’ve listened to the album several times through, and I will now go over each song individually and give them a score out of 10:

1. Remnants: An awesome instrumental track that sucks you in with its mysterious and dark, yet elegant, sound. It flows into the next track seamlessly and beautifully, and is a perfect way to lead off the album. 10/10

2. Asylum: An aggressive and emotional track, this song sets the tone for the remainder of the album. The opening bit of guitar work by Donegan is especially captivating, and the interlude intensifies the dramatic tone of the song. One of the album’s real gems, and a perfect choice for the title track. 9.5/10

3. The Infection: Despite the intense opening, this song really showcases Draiman’s smooth, melodic voice. It also features what is probably the best guitar solo on the album. A very solid tune. 8.5/10

4. Warrior: Begins with an extremely aggressive guitar riff, followed by one of Draiman’s trademark “noises” that creates a nice transition into the first verse. Draiman shows off his vocal diversity here, as much of the caustic vocals in the verses are sure to remind long-time fans of The Sickness. 8.5/10

5. Another Way To Die: The lead single off Asylum, this song deals with the issue of global warming. The band makes it no secret that it sees global warming as a huge problem for the world, as it is described as “another way to die.” Whether or not you agree with the band’s stance, the song is pretty cool, as it opens with an elegant first minute that quickly becomes aggressive with a nice transitional riff by Donegan. Like I said, it’s a pretty cool song, but I feel that even though it’s the lead single, it still leaves something to be desired and ranks lower than many of the album’s other tunes. 7/10

6. Never Again: An awesome, hard-hitting tune about the Holocaust. Draiman grew up in a devout Jewish household, so the subject definitely has some strong meaning to him. This song really embodies Disturbed’s best element–it is heavy yet very melodic and dramatic. One of my favorites on the CD. 9/10

7. The Animal: This song is about the idea of a werewolf transformation. It has a dark, ominous beginning that really enhances the track overall, and Draiman once again comes in with his animalistic noises (what better song to use them in than The Animal?). An excellent song overall. 9/10

8. Crucified: Not a bad song, but it doesn’t really compare to most of the others. Highlights are Draiman’s soaring vocals and Donegan’s nifty guitar work, especially in the interlude. 6/10

9. Serpentine: I love this song. The opening guitar work and background instrumentation create a truly desperate and dramatic feel. Having said that, the true highlight of the song is the interlude, which features a catchy little pattern by Donegan, some deep whispering by Draiman, and bell sounds in the background that really contribute to the dramatic tone. The stringed instruments at the end are the icing on the cake. 10/10

10. My Child: Features a creepy beginning with the sound of a crying baby. The rest of the song is very solid (the interlude/solo is a highlight), but overall, the track doesn’t really stand out. 6.5/10

11. Sacrifice: The beginning riff is quite delectable, and Draiman again demonstrates his versatility; his deep, harsh voice in the lines preceding the chorus is one of the most memorable parts of the song to me. There is also a nice little guitar solo. 7.5/10

12.  Innocence: A strong close to a very solid record. The song is is about corrupt attorneys and the people they defend. The chorus is a true highlight, as the melodic lines are really gripping, and Donegan’s background guitar work between the first and second parts of the chorus, and towards the end of it, is pretty awesome. Also of note, Wengren’s work on the drums truly shines in the interlude. 9/10

Overall, this is another excellent release by Disturbed, who were able to combine their most identifiable elements to create a very mature album. While there is nothing truly revolutionary about this CD, it features all of the things about the band that fans have come to love, and it does so with good balance. Any Disturbed fans (or hard rock/metal fans for that matter) who don’t like Asylum should probably be put in a madhouse themselves!